An Open Door Clinic Patient Story During the COVID-19 Pandemic

This story was written-up by Open Door Clinic's outreach nurse, Julia, in preparation for testimony provided by Heidi Sulis, MPH and Julia Doucet, RN to a joint hearing of the Senate Health and Welfare and House Health Committees on April 22, 2020, and to the Senate Agricultural Committee on April 23, 2020.

Eliel called us on a Tuesday afternoon. He reported having trouble walking from his trailer to the barn without gasping for air. He felt like his heart was beating strongly in his chest and he just didn’t have an appetite. He didn’t have a cough or chest pain and didn’t think he had had a fever but felt like he had been getting progressively worse over the past week. At 48 years old, Eliel was a healthy, fit man. He hadn’t smoked since he left Mexico 4 years ago. He didn’t have hypertension, diabetes, or underlying respiratory or cardiac issues. As he spoke to us, he stopped frequently to catch his breath. While his demeanor and voice were calm, it was obvious that he was deeply troubled by his symptoms. The outreach nurse encouraged him to go to Porter Hospital’s Emergency Room. He agreed and arranged for his boss to take him. The outreach nurse notified the ER of his impending arrival, providing them with clinical and demographic information to allow them time to set up their interpreter video iPad.

Eliel crashed soon after his admission to the ER. His oxygen saturation fell, his breathing became extremely labored and he was febrile. He was sedated and intubated. UVM Medical Center was contacted and Porter transferred Eliel via ambulance directly to UVMMC’s COVID-19 Intensive Care Unit.

Three weeks earlier, the farm owner and his family had vacationed in Florida. There, one after another, they developed a very mild cough and transient body aches. Within a couple of days, they felt better. One family member developed more moderate symptoms and due to her work with vulnerable populations insisted on being tested for the coronavirus. She tested positive.

Early the next morning, we received the hospital report and nurse check in. Several hours later we received a text message from his son who was told by other workers to contact us. He was calling from California where he worked hoping for some information about his father. The outreach nurse called up to the floor spoke to Eliel’s nurse. She gave her Eliel’s son’s phone number and asked that they speak to him via the interpretation line to update him on his father’s condition. She also spoke to his case manager who would help start his financial assistance paperwork and gave her the son’s number should she need that for anything.

Later in the day the outreach nurse received a call from the farmer. He, too, had been in contact with the hospital and was concerned about the other six workers on his farm. While each worker had their own private room, they shared the kitchen and the bathroom and had been exposed to Eliel prior to his hospitalization. The outreach nurse reviewed COVID-19 signs and symptoms, infection control basics, and how to protect both the owner and his family and the other workers. A few days later, she would drop off a COVID kit for the farmworkers that included thermometers and disposable covers, hand and surface sanitizer, hand soap, ibuprofen, two cloth masks per person on the farm, and information in English and Spanish about the virus.

After five days of intubation and sedation, Eliel was weaned off the sedatives and allowed to wake up. Since he was on airborne isolation, he was not allowed any visitors and the limited medical staff caring for him had to don full personal protective equipment to enter his room. As he woke up, his attending nurse was there with an interpretation iPad to communicate with him. He looked around in confusion at all the beeping machines, slightly deafened by the whoosh of oxygen flow and the noise of the ventilator. The nurse explained that he had acute respiratory distress syndrome (ARDS) and pneumonia, a result of a presumptive COVID-19 infection. He was finally given his cell phone and allowed to communicate directly with his family.

After he was extubated, he was transferred onto the regular medical floor where he was weaned off oxygen. After 11 days of hospitalization, he was discharged with orders to “take it easy” for a week before returning to work. Because he doesn’t have paid time-off, he will have lost three weeks of pay before he makes it back to work. While the farmer would love to be able to afford to pay him, his back is “against the wall” with dairy in its current state. Since Eliel makes too much money to be eligible for Medicaid, he is ineligible for emergency Medicaid, even though this medical event was life threatening. Because the hospital patient financial assistance program does not account for the children he supports in Mexico, his household size of one makes his income relatively high. If he is lucky, he will get 60% off his entire hospital bill, excluding the ambulance ride which does not offer financial assistance.

His COVID test came back negative, as did a second one. Even though all evidence pointed to a coronavirus infection and the doctors treated it as such, the Vermont Department of Health (VDH) was unable to become involved in the case. Without a positive test result, they could not do contact tracing or education and outreach. Christina Dean, public health nurse for the VDH spoke with the outreach nurse who, in turn, reached out to the farmer. She instructed him to have the workers take their temperatures twice a day (with the above furnished thermometers) and report any abnormalities to the ODC. While the standard of care for COVID is to have all those exposed to an infected person quarantine themselves for two weeks, ODC believed that that would lead to increased risk of the workers fleeing to find jobs on other farms. Workers who are told they cannot work when the work is readily available will most likely go unheeded. With input from ODC’s medical director, and VDH staff, we agreed that the best approach would be to quarantine the farm while allowing the workers to go to work. Besides, working outdoors and in a well-ventilated barn are preferable to being cooped up all together in a double-wide trailer.

UWAC Note: Donations received to Addison County Responds allowed us to provide a mini-grant to Open Door Clinic, where they used the funds to create and distribute "Kits Against Corona" to migrant farm workers - see a sample of kit below! 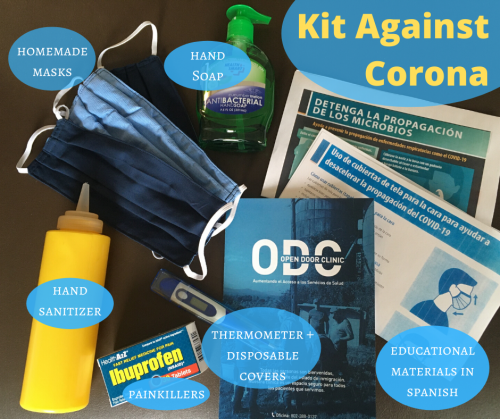