Senator Patrick Leahy was elected to the United States Senate in 1974. At 34, he was the youngest U.S. Senator ever to be elected from Vermont. After serving as a senator for nearly 50 years, Leahy is ranked 1st in seniority in the Senate. Senator Leahy was born in Montpelier and grew up across the street from the same State House where he would write, sponsor, co-sponsor, and vote for many impactful pieces of legislation that have helped Vermont residents for decades.

Substance misuse is an issue that both the Senator and UWAC have worked long and hard to fight. As the Senate President Pro Tempore, former Ranking Member on the Senate Judiciary Committee, and the most senior member on the Senate Appropriations Committee, Leahy has made significant strides to combat this issue and countless others. In 2015, Leahy authored a program to expand medication-assisted treatment (MAT) programs in response to an increased demand for opioid treatment in Vermont. This program led to a three million dollar grant awarded to Vermont for opioid treatment, and later, a 5-year $12.4 million grant from SAMHSA to curb prescription drug misuse. Leahy also co-managed the Senate Judiciary Committee panel's debate on the Comprehensive Addiction and Recovery Act which was signed into law in 2016 to fight against opioid and heroin misuse. 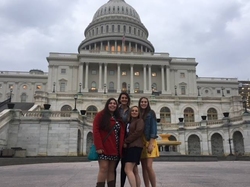 In 2019 and 2020, our staff attended the CADCA (Community Anti-Drug Coalition of America), National Leadership Forum. We met with Senator Leahy on Capitol Hill to thank him for his continued support for youth substance prevention funding. UWAC is the recipient of two federally funded youth substance prevention grants; Drug-Free Communities (DFC) and Partnerships for Success (PFS). Most recently, we Zoomed in with Leahy’s staffer, Pollidah Major, to discuss the importance of workforce development, healthcare, and housing in Addison County and across Vermont.

In November of 2021, after decades of service, Senator Leahy announced that he would be retiring from office after this term. We are so grateful for all of the many things that Senator Leahy has done for Addison County and Vermont. This year, at the annual CADCA National Leadership Forum, Senator Leahy received the Special Lifetime Achievement Award. This award is presented to outstanding members of Congress who have championed legislation and strategies to protect and enhance the federal role in substance use and misuse prevention, education, and research. 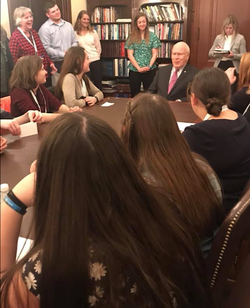 "I am proud to be Vermont's longest-serving Senator, and I hope that my work has made a difference for Vermonters and beyond. I've brought Vermont's voice to the United States Senate and Vermont's values around the world...I will forever carry with me the enduring bond to my fellow Vermonters, whose goodness is what I strive for as their representative." -Senator Leahy

Thank you for your service, Senator Leahy, and congratulations on a lifetime of achievement!